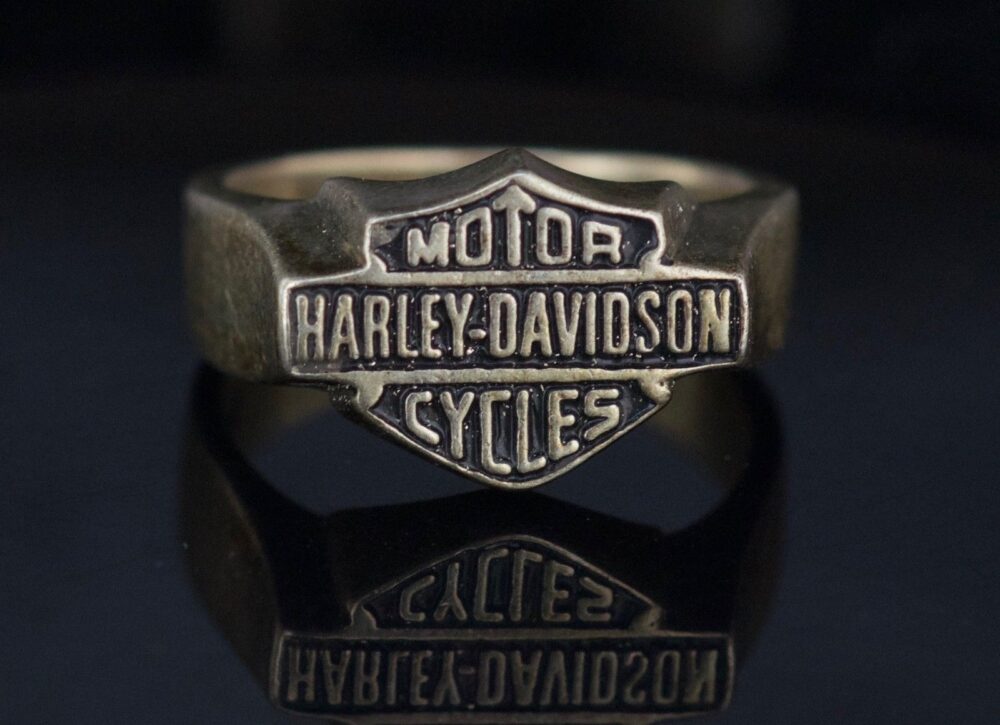 Harley-Davidson is not only motorcycle. It is also a whole bunch of proprietary gear including jackets, helmets, jewelry, etc. If you are a devoted fan of the brand, besides a bike, you should have at least a couple of accessories to express your love. If you’re not an owner of H-D gears yet, hurry up because you’re not alone hunting down these sweep-off-your-feet items.

It is a no-brainer to guess what it is – body ornaments featuring the brand’s logo or other symbols associated with it. Generally, Harley rider items belong to the category of biker jewelry but not every single piece of jewelry belongs to Harley-themed one.

The most prominent symbol used in H-D jewelry is, of course, Bar & Shield, that’s the official name of the brand’s iconic logo. A piece of jewelry may carry the logo alone or combine other elements for a more dramatic effect – flames, eagles, motorcycles, motorcycle chains, skulls, etc.

Bar & Shield is copyrighted so only the brand itself and officially licensed businesses can use it for commercial purposes. When it comes to jewelry, there is an official partner that crafts rings, bracelets, bells, necklaces, and earrings with Harley-Davidson insignia. The problem with this jewelry is that it is made of stainless steel but carries a pretty hefty price tag. Almost 60 bucks for a ring? That is a little bit too much, don’t you think?

Luckily, there are many other jewelry manufacturers that produce biker jewelry with Harley-Davidson spirit. They can’t use Bar & Shield and other copyrighted stuff but they draw inspiration from the motorcycle brand along with its insignia and interpret it on its own.

You’ll have no problem identifying their products as Harley jewelry without the logo or other images being in-your-face. For instance, check out these jewelers at https://www.bikerringshop.com and look how delicately they approached the Harley-Davidson theme. The benefit of ‘tribute’ brands is that you can get your hands on a striking item made of silver without breaking the bank.

Harley Davidson jewelry bears various designs and symbols and you’re about to learn more about it.

Harley’s logo has gone through countless changes over the years but the legendary Bar&Shield design remains practically unchanged since 1910 when the company first introduced it. By the way, it was the first logo of the American motorcycle company. There are many other designs the company created for major motorcycle events and its own anniversaries; you can read more about the H-D logo evolution. However, these new designs are not nearly as popular as Bar and Shield.

The logo is called like this because it is comprised of two elements – a bar carrying Harley-Davidson against the shield with Motor Cycles inscription. This design and its variations are extensively used in jewelry-making. You can see the classic Bar & Shield, its silhouette without words, Harley-Davidson Motorcycles without the Bar Shield, and other designs.

The V-Twin engine is probably the reason Harley-Davidson motorcycles are so insanely popular. While at the beginning of the 20 century other manufacturers struggled to increase the power of their bikes, H-D introduced their brainchild, the legendary V-Twin.

The engine consists of two symmetrical parts placed at an angle to each other thus forming the V shape. Although today many other brands install V-Twin engines on their bikes, its name and shape are closely associated with the Harley-Davidson brand. It is natural that jewelry manufacturers pay tribute to the celebrated engine in the body ornaments and accessories they produce.

Before we go into detail on it, we should say that eagles are present throughout the biker culture. There is a simple explanation. The first bikers were the WWII veterans who, mostly, served in the air Force. There is a tradition to adorn aircraft with drawings that are supposed to intimidate the enemies or emphasize skills or traits of the crew.

One of such images were eagles – they are fast and merciless, just like pilots themselves. When the pilots exchanged their flying mean machines to two-wheelers, they continued painting familiar symbols and images on bikes. So, eagles are associated with the biker movement on the whole rather than Harley-Davidson specifically.

The brand has its own interesting story of how eagles made their way on its motorcycles. It all started in the 1930s when the great depression plunged motorcycle sales. The company started seeking new ways to spark people’s interest and eventually, they found a cheap and effective solution. For just a few dollars, they offered customers to put an eagle image on the tank. By the way, it is considered the first bike customization ever.

A few decades later, another Eagle appeared on H-D products. This time it was the Screaming Eagle, the name that the performance parts along with the Custom Vehicle Operation program received. Finally, you can see an eagle on the Harley Owners Group’s (HOG) emblem.

The bottom line is that the brand actively uses eagles in their products and insignia, so it is no wonder why eagles are present in H-D jewelry.

One more symbol widespread in the biker community is a skull. It belongs to all bikers so Harley-Davidson has a full right to employ skulls for their purposes. As we have already said, the company likes issuing logos dedicated to prominent biker events. A logo designed for the Daytona Bike Week 2000 features a skull along with the brand’s name and wings (surely, the wings refer to eagles).

By and large, it is common to blend H-D branded images with popular biker symbolism. After all, the brand exists for bikers and thanks to bikers, so there is nothing wrong or strange in using images so much loved in the motorcycle community. Skulls stare at as from biker jackets, helmets, vests, motorcycle stickers, and, of course, biker jewelry.

The Harley Davidson logo is one of the most recognizable and respected images in the biker culture. If you want to manifest your admiration to the American motorcycle brand, you can put a Bar & Shield ring on your finger, throw in a bracelet or don a necklace. If you enjoy accessories that blend H-D images with popular biker symbols, there are items featuring eagles, skulls, motorcycle parts, flames, etc. Every single person can find a piece of jewelry to his or her liking whether it be a licensed product or a Harley-inspired tribute.